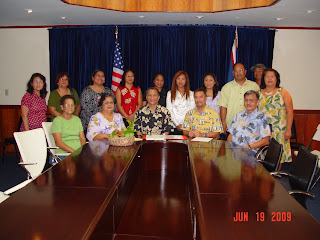 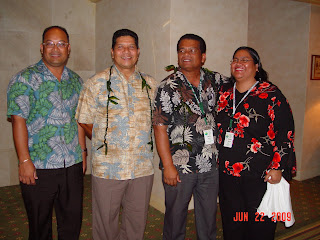 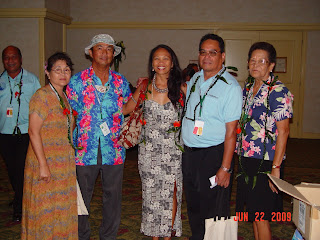 
The 28th Annual Pacific Islands Bilingual Bicultural Association (PIBBA) Conference was a success! The conference theme, “Invigorating Languages and Cultures of the Pacific” was highlighted in each of the conference days from June 22-25, 2009. Each day featured the gathering of everyone singing the PIBBA song, which includes all the languages of the region, such as the following chorus: “Iokwe, Raan Annim, Kaselehlia, Alii, Aloha, Olomwaay, Hafa Dei, Tuwoh, Mogethin, Talofa.”

Among the entities that attended the conference are Republic of the Marshall Islands, Republic of Palau, Chuuk, CNMI, Pohnpei, Kosrae, and Guam. The mission of PIBBA is to bring these entities together to promote cultural and language activities by disseminating information, involving communities, and encouraging quality education programs through the western Pacific.

The first night of the PIBBA Conference was held at the Guam Marriott Resort and included the call of the Kulu conducted by Ronald Laguana, GPSS Chamoru Studies Division Administrator; Parade of Flags by each delegation; National Anthem; Guam Hymn; Fanohge CHamoru; I Inefresi; traditional chant; Invocation & Opening Remarks by PIBBA International President Shelten Neth; presentation of Legislative Resolution; dinner; and Keynote Speech by Dr. Robert Underwood, President of the University of Guam and the first PIBBA President.

The second and third days of the PIBBA Conference were held at the University of Guam, College of Liberal Arts and Social Sciences buildings. The second day featured speaker/storyteller, Silvina Charfauros-Cruz Taumomoa, followed by various cultural and educational /language workshops.

The third day featured a panel discussion with the founding PIBBA Officers, namely Dr. Robert Underwood, Masa-Aki Emesiochl, and Carmen Taimanao. The Hurao Academy cultural dance group performed, which was followed by a special awards ceremony for the Indigenous Teacher of the Year and Pioneer of the Year for each of the entities. This was conducted by Dr. Jose Q. Cruz, Chairperson for the awards and PIBBA International Historian. Additional cultural and educational/language workshops were conducted, and the day ended with a silent auction of cultural arts, crafts, and more.

The final day of the conference was held at the Merlyn G. Cook School & Malesso Pier Park at the southern end of the island. It featured the traditional Chamorro cooking - Chinahan Ceremony of baking food in an earthen (underground) oven that was three-and-a-half deep, and one used by ancient Chamorros and their descendents until nearly the middle of the 20th century. Chants and prayers were sung as breadfruit, sweet potatoes, taro, bananas, mahi mahi, tuna, parrot fish, and other kinds of fish were placed on top of a thousand pounds of heated lava rocks & logs covered by coconut and banana leaves that burned to cook the food. Mark Benny Mendiola and Tony Ramirez, PIBBA steering committee members led the way for the Chinahan Ceremony. Additional cultural entertainment and activities took place, including the historic Malesso’ tour, Cocos Island boat ride, CHamoru games, dancing, weaving, and singing. A special panel of speakers from each of the entities also spoke to discuss the PIBBA goals of promoting language and culture. The PIBBA International Business Meeting was later conducted, and the new PIBBA officers were elected. Afterward, the special Chinahan dinner took place, followed by presentations and performances by each entity. The closing remarks were given by incoming PIBBA President and PIBBA Conference Co-chairperson, Rosa Salas Palomo.

Deep gratitude goes out to all PIBBA Conference steering committee members, and all the entities that joined us to make the 28th Anuual PIBBA Conference a memorable event that will always be remembered! Un Dangkulo Na Si Yu’os Ma’ase’! Kinissow! Kommol! Mesulang! Kalahngan! Kammagar!
Posted by mnrivera at 4:28 AM No comments:

Educators are teaching more diverse populations in their classrooms. With the diversity that exists today, it is necessary for them to employ effective teaching strategies that empower students. Here's a snapshot of meeting the needs of diverse learners: 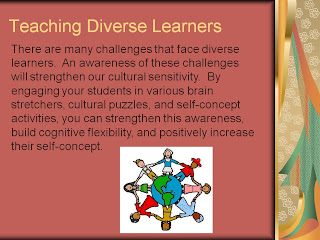 Posted by mnrivera at 6:26 AM No comments: 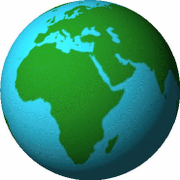